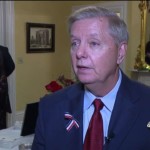 In a release, U.S. Senator Lindsey Graham made the following statement:

“A homerun speech by President Trump about the challenges we face with Iran. It was measured and firm.

“To the Iranian people: President Trump laid out a pathway forward for peace and prosperity. I hope you take it.

“To the world: President Trump correctly identified the 40 year history of Iranian hostility and destabilization of the region. I hope you will help President Trump change the regime’s behavior so we can avoid a war.

“To the American people and Congress:  What President Trump is seeking from Iran is to end 40 years of tyranny, to stop them from being a state sponsor of terrorism, and to abandon their nuclear weapons program once and for all.

“All Americans should support President Trump’s efforts to resolve the threat from Iran peacefully and fully understand the Maximum Pressure campaign must continue with a credible military component.”

Republican Senator Tim Scott also released a statement in regards to President Trump’s remarks on the escalating tensions between the United States and the Islamic Republic of Iran: He tweeted:

Tim Scott
@SenatorTimScott
“The United States will always defend American lives facing threats and attacks. For far too long, we’ve allowed Iran to escalate their provocations on our armed forces and allies without repercussion. Those days are over.

“Iran’s belligerent aggression is well-documented and their continued actions proved they were not going to back down. I commend President Trump, as well as our Defense Department, National Security Council, and intelligence community for their decisive and calculated actions to keep Americans safe.”

@WhipClyburn
‘Iranian missile strikes against an American military base heightens concerns about the safety and security of our troops and Americans abroad. They should be this Administration’s top priority. Escalating tensions with Iran is not the answer.’
Categories: Local News, National News, Politics
Tags: Congressman James Clyburn
Share