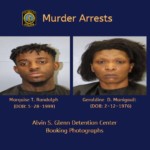 According to the Richland County Coroner , Jaquan Ashford was shot in the upper body and pronounced dead at the hospital.

Police say they believe the shooting is an isolated drug-related incident.

Both suspects are being held at the Alvin S. Glenn Detention Center.