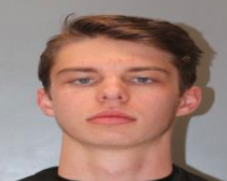 Garrett Kennard is being held at the Alvin S. Glenn Detention Center on a $20,000 bond following the alleged assault on January 25th.

According to officials, Kennard is accused of forcing a 15-year-old female victim to commit a sexual act while at party inside a Columbia residence.

The suspect also allegedly inappropriately touched the victim and prevented her from leaving the immediate area.

The victim went to a local hospital for medical treatment.

Lexington deputies invite public to "Coffee with a Cop"