During his visit, the Vice President made a surprise stop at Doc’s BBQ on Shop Road. He and South Carolina Governor Henry McMaster met with folks eating at the restaurant. 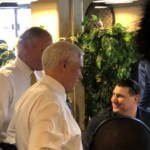 The Vice President is attending a President Donald Trump Victory luncheon in Columbia, before heading to Charleston for an event at The Citadel.

Our http://@MariaSzatkowski  is with the Vice President, you can follow her for updates.