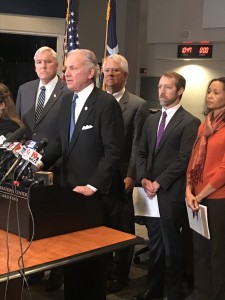 Officials say the risk to the public is very low and they urge people to remain calm and there is  no risk of spread at this time.

DHEC says specimens have been sent to the Centers for Disease Control for confirmation.
MUSC officials say they are offering a free online care option for those experiencing symptoms of the coronavirus. Here is a link to learn more.

Here is what we know about the possible cases.

According to officials with the Department of Health and Environmental Control (DHEC), one of the cases is an elderly woman from Kershaw County who has been hospitalized and is currently in isolation.

Health officials say the second individual is also a female, from Charleston County who D-HEC says recently traveled to France and Italy.

According to MUSC, the unidentified second woman currently in self isolation, is an employee at the Medical University of South Carolina. Health officials at the hospital say the woman went to D-HEC officials after learning that she had been in an area of Europe where ‘community spread’ had been reported.

Officials say she had not returned to work since her trip, and did not have to be hospitalized and is at home in self isolation.

State Epidemiologist, Dr. Linda Bell says it’s understandable that residents will have concerns about the virus and its potential impact on South Carolinians. Bell says,

“While the risk to the public remains low, there is no evidence of ongoing transmission in the community at this time and our primary goals remain prevention and control.”

The CDC has posted information for those who have recently traveled and have questions about what symptoms you should be on the lookout for to before seeking medial attention.

If you have traveled and feel sick with fever, cough, or have difficulty breathing, call your doctor and avoid contact with others. For more #COVID19 frequently asked travel questions visit: https://t.co/oWKzAemLLE. pic.twitter.com/fqzBDRadxr