Pedestrian dies after being hit by truck on Lynchburg Highway 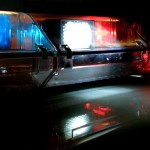 Authorities say it happened at Lynchburg Highway near Vista Lane at 9:10 p.m.

According to investigators, the pedestrian was walking on the road with dark clothing on.

Troopers say the truck hit the pedestrian, who later died at a hospital.

Highway Patrol says the truck driver and the passenger were wearing seat belts and weren’t injured.