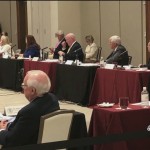 The group first met April 23, and since then, smaller groups have met at the USC Alumni Center to talk about ways to reopen the state’s economy.

The Governor opened the meeting by saying to the participants, “we need to move as quickly as we can and safely as we can.”

Among those speaking, Ted Pitts with the SC Chamber. Pitts discussed two issues faced by small businesses, which include lack of demand for their products and inability to pay off some of their bills.

Also speaking at the meeting, Christian Soura with the SC Hospital Association. Topics included what the Protection Committee will be discussing, including the safe return of people to workplaces, increasing testing and contact tracing.

Our Tim Scott is following the meeting, you can follow his updates here https://twitter.com/TimScottTV

Atlanta Braves give no indication of considering name change