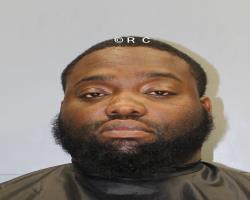 Richland Co. SC (WOLO) —- The Richland County Sheriff’s Department is investigating a shooting that has left one man dead, and another behind bars.

Authorities say 26 year old Telvin Quintavis Jackson has been charged with murder after deputies say he shot 24 year old Khamori D. Scott during what authorities say was an ongoing dispute over money.

Officials say they were initially called to the 2000 block of Weiss Drive for what they thought was an armed robbery. But while in route deputies say they received a second call for the same location, this time for a shooting.

When deputies arrived they say they discovered Scott suffering from multiple gunshot wounds, and Jackson still at the address with a handgun.

On Tuesday night around 10:30, officials say Scott came to Jackson’s home with multiple individuals, where deputies say he blocked Jackson from leaving before robbing him at gunpoint.

Officials say Jackson told them after the alleged robbery he went to get a gun he claims  he only grabbed with the intention of holding Scott at the home at gunpoint until authorities arrived. Jackson told deputies that changed when Scott reached for his own gun and he fired his.

24-year-old Scott was taken to the hospital, where he was later died.

An investigation into the shooting is ongoing.