COLUMBIA, SC (WOLO)– Columbia Police say they have arrested a man accused of pointing a gun at a group of protestors in downtown Columbia Friday. 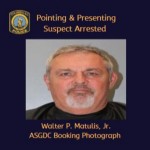 According to Police, Walter Peter Matulis, Junior was arrested at his Gaston, S.C. home and charged with Pointing and Presenting a Firearm at a Person.

Police say on Friday, Matulis allegedly pointed the gun at the victims who were peacefully protesting for Black Lives Matter at the 1200 block of Gervais Street.

According to police, Matulis who was driving a silver Kia Rio, is accused of initially displaying a rude gesture, then police say, words were exchanged between the two parties.

Police say as the light turned green, Matulis is accused of stopping in the middle of the roadway and pointing a gun at the victims.

Police say one of the victims managed to capture the incident on video which helped the investigation.