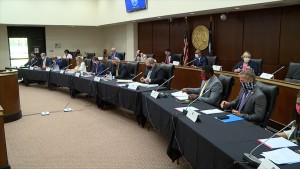 Columbia, S.C. (WOLO) — The House Equitable Justice System and Law Enforcement Reform Committee met Tuesday for the first time. This is the committee that was formed last month in the wake of local and national protests over the killing of George Floyd at the hands of the police.

The 18 member bipartisan committee will be reviewing topics like police and sentencing reform in the state. It is co-chaired by House Minority Leader Rep. Todd Rutherford and House Majority Leader Rep. Gary Simrill.

“We got to talk about reforms and looking at the three p’s. Those p’s being the people, the police and policy,” said 5th Circuit Solicitor Byron Gipson, who was one of the panelists that testified Tuesday.

Committee members heard testimony from panelists about topics including law enforcement training, tactics, standards and accountability, among other things.

“Questions that I think we have to talk if you’re talking about police reforms is why do people run? We’ve got to ask that question,” said Gipson. “We do need, and let me very clear about that, we do need systems in place so that that information that is collected on body cams can be transferred to solicitors immediately.”

“Any police officer that is handed a gun in the state of South Carolina needs to be handed a camera. It’s that simple. Body cameras need to be mandated. And they need to be mandated to anyone and along with that the training that goes along with it, and the policies and procedures of when you turn the camera on and when you turn it off. And who it’s eligible for. And all of that is something that can be done and should be done,” said 14th Circuit Solicitor Duffie Stone.

Panelists also talked about how to possibly address some of the police reform issues.

After several hours of testimony, the committee split into four subcommittees to tackle several of the issues and at the end of the day to create policy to help. Reports from the subcommittees are expected on Sept. 15.

One city measures coronavirus spike by focusing on sewer system