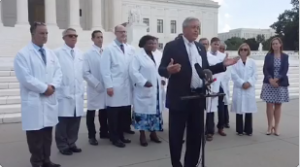 Washington, D.C. (WOLO)–A video featuring a group of doctors making claims related to the coronavirus was removed by Facebook, Twitter, and YouTube after going viral online Monday.
The video originally published by Breitbart shows doctors discouraging the wearing of masks (no one in the video is wearing a mask) and referring to
hydroxychloroquine as an effective treatment for COVID-19 in spite of FDA claims to the contrary.

Both Twitter and Facebook officials told CNN that the video was removed for  sharing false information about cures and treatments for COVID-19.
Also featured in the video, South Carolina Congressman Ralph Norman.

ABC Columbia reached out to Congressman Norman’s office for a comment on the video.
Norman’s Communications Director Austin Livingston responded

“Our current understanding is that Stella Immanuel’s remarks are being censored from social media platforms because she used the phrases “we have a cure” and “don’t need a mask.”  (That’s different from saying, for example, “here is what I’m seeing with my patients.” Or, “here’s what we are doing in our hospital in Texas.” Had she phrased it this way, chances are it would not have been censored.) Congressman Norman was present at this event to help encourage schools to try to safely reopen for in-person learning this fall, if possible, and was not privy to her remarks ahead of time.  While the Congressman does not agree with her statement on the use of masks, and certainly has no expertise in medications, he strongly believes that she has a right to say what she came to say. Without being censored by big tech.”

Livingston also included a link to Congressman Norman’s comments at the news conference where he states that he is a “big proponent” of masks in close quarters.

The news conference was organized by a group called the Tea Party Patriots.