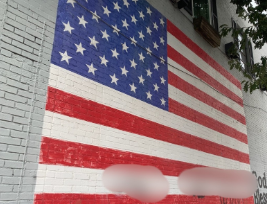 Columbia, SC (WOLO) — The Columbia Police Department (CPD) are looking for the person(s) responsible for vandalizing a mural in Five Points.

According to CPD, an officer discovered the American flag mural painted on the former Yesterday’s restaurant on Devine Street riddled with graffiti around 10:00 p.m. July 29.

Officials say the writing that appeared to be done using black spray paint, was covered in what authorities say is ‘possible demonic numbers’ covering three areas on the bottom of the mural.

CPD officers are in the process of looking for surveillance video that may help them in their search of the culprit and They say may have even caught the suspect (s) in the act.

The owner of the building was contacted shortly after the graffiti was discovered at which time it was covered up.

CPD says whoever committed this act of vandalism can face fines and or jail time for malicious injury to real property.

If you have any information that can help contact Crimestoppers.