John Farley,
Near the far northern tip of Canada, there’s a lot of ice. But that ice is melting because of Global Warming. NASA has confirmed that the Milne Ice Shelf has collapsed – shrinking by about 40% in just 2 days in July. Here’s part of an article on reuters.com:
“The Arctic has been warming at twice the global rate for the last 30 years, due to a process known as Arctic amplification. But this year, temperatures in the polar region have been intense. The polar sea ice hit its lowest extent for July in 40 years. Record heat and wildfires have scorched Siberian Russia.Summer in the Canadian Arctic this year in particular has been 5 degrees Celsius above the 30-year average, Copland said.

That has threatened smaller ice caps, which can melt quickly because they do not have the bulk that larger glaciers have to stay cold. As a glacier disappears, more bedrock is exposed, which then heats up and accelerates the melting process.”

Here’s the link to the whole article: https://www.reuters.com/article/us-climate-change-canada-idUSKCN2523JH 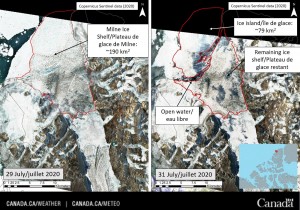 Another Tropical Storm in the Gulf of Mexico