The suspects are accused of attempted armed robbery, weapons charges 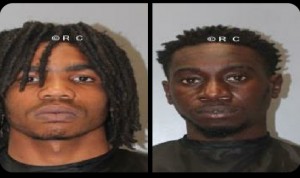 Officials say the two went into the restaurant and pointed a gun at a cook before demanding money. Deputies say a good samaritian who had his own gun intervened and attempted to confront the suspects.

Authorities say one of the men opened fire before both men ran from the scene. K-9 deputies were able to track the duo down where police were able to take them both into custody and are currently being held at the Alvin S. Glenn Detention Center.