Tuesday, Aug. 18 marks 100 years since the 19th Amendment was ratified, giving women the right to vote. 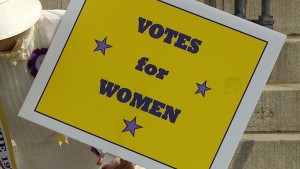 In honor of that, women leaders from across South Carolina met at the State House to celebrate 100 years of women’s suffrage.

“We had a whole bunch of new voters that people assumed would vote like their husbands. But history shows that having women at the polls, having women in public office really makes a difference in terms of our priorities,” said Holley Ulbrich, Co-President of the League of Women Voters South Carolina.

“People have a tendency to forget, and we never want them to forget. One of the things that I believe in is that you always have to remember your history,” said District 54 State Rep. Patricia Moore Henegan.

“I just think it was exciting to see so many women in positions of leadership in South Carolina. To see women in college presidents, and women, particularly African American women who are state legislatures, it makes me very proud to be a South Carolinian,” said Ulbrich.

“We are supposed to be setting the example so women ahead of us, can go and continue to do the same great work,” said Evette.

Even though rights for women have come a long way, there’s still work to be done for equality.

“The fight is not over. See because voting is power, and if you let people forget that then you’re going to suffer. We will suffer. So you have to constantly remind them that they need to vote,” said Henegan.

“I think we have a lot to celebrate. We’ve come a long way, baby, and we’ve got a ways to go yet,” said Ulbrich.

In honor of the anniversary, President Trump signed a proclamation declaring August ‘National Suffrage Month.’ He also said he would pardon suffragette Susan B. Anthony, who was tried and found guilty of voting in the 1872 presidential election.