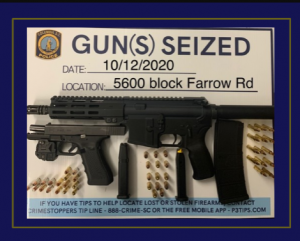 Columbia, SC (WOLO) —  As part of the Columbia Police Chief W.H. ‘Skip’ Holbrook’s on-going efforts to cut down on violent gun crimes that take place within the City of Columbia. To curb this,  the Columbia Police Department started a gun seizure effort back in February to get firearms out of the hands of those who are not legally allowed to carry a gun and then posted them on their police department website.

Most of the posts highlight various gun seizures that to date total more than 150 confiscated firearms from people who were not suppose to have them in their possession to begin with, or guns that were used during the commission of a violent crime, and in some cases traffic stops.

Columbia police are asking for the public’s help and say if you happen to see crimes involving guns in your neighborhood to call police and report it.

You can contact CRIMESTOPPERS in any of the following ways: CALL toll-free, 888-CRIME-SC.  LOG onto: www.midlandscrimestoppers.com, and click on the red “Submit a tip” tab. DOWNLOAD the new P3 Tips App for Apple or Android devices. All of your call, texts, and emails can be made anonymous.