The Arctic is warming 2-3 times faster than the rest of the planet. Below are a few snippets from an article summarizing 15th annual Arctic Report Card, where scientists summarize what’s going on in the Arctic.

“Nearly everything in the #Arctic, from ice and snow to human activity, is changing so quickly that there is no reason to believe that much of anything in 30 years will be as it is today.” (Rick Thoman, U. of Alaska Fairbanks)

One of the banner events documented by this year’s report card was unprecedented heat in the Sakha region of northeast Russia and the adjoining Arctic Ocean. Wildfires – some of which wintered over in the topmost layer of organic matter, lurking as “zombie fires” – burst onto the Siberian landscape months ahead of schedule, some burning within 10 miles of the Arctic’s Chukchi Sea. On June 20, the town of Verkhoyansk (latitude 67.55°N) reached 100.4 degrees F, the highest reading ever confirmed north of the Arctic Circle.

Sea ice and the lack of it

The past year was another lackluster one for Arctic sea ice. The maximum ice extent in September was the second lowest in 41 years of satellite monitoring, with only 2012 having seen less. In October, both the sea ice extent and sea ice thickness (the latter observed regularly over the past decade) were the lowest on record for the time of year, thus also producing the lowest ice volume on record for any October. As of early December, the sea ice extent was second lowest for the date, behind only 2016.”

The full article is here: https://yaleclimateconnections.org/2020/12/noaa-report-card-arctic-is-having-more-and-more-difficulties/ 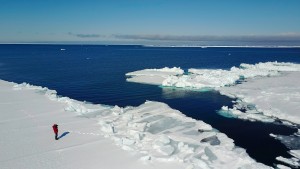 So You Say We Can't Transfer to Renewable Engergy?