Scientists have long discussed a theory that roughly 65 million years ago a huge asteroid (somewhere between 7 and 40 miles in diameter) struck the earth. The result? A hole about 100 miles wide and 12 miles deep. The shock wave blasted around the world causing huge earthquakes, tsunamis, landslides, lots of melting, and wildfires. And this ended the age of the dinosaurs.

It turns out that new evidence found by scientists supports this theory. Scientists have dug down into the hole of the crater underneath the ocean off the coast of Mexico. Jay Melhosh, a geophysicist at Purdue University who studies impact craters says, “It tells us what went on inside the crater on that day of doom that killed the dinosaurs… “All of this mayhem is directly recorded in the core.”

Here are 3 articles that give more details: 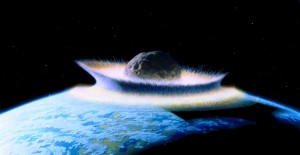