From NASA: “NASA’s Ingenuity Mars Helicopter captured this shot as it hovered over the Martian surface on April 19, 2021, during the first instance of powered, controlled flight on another planet. It used its navigation camera, which autonomously tracks the ground during flight.”

It took place roughly 180 million miles from earth under remote controls from NASA.

“Monday, NASA’s Ingenuity Mars Helicopter became the first aircraft in history to make a powered, controlled flight on another planet. The Ingenuity team at the agency’s Jet Propulsion Laboratory in Southern California confirmed the flight succeeded after receiving data from the helicopter via NASA’s Perseverance Mars rover at 6:46 a.m. EDT (3:46 a.m. PDT).” 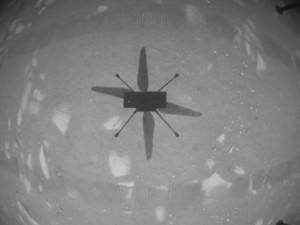 Could We Stop an Asteroid Hitting Earth?

The Globe is Warming - And So is Columbia