A fish that pre-dates the dinosaurs that was thought to be extinct, was caught – very much alive. This fish dates back more than 400 million years. Some fisherman recently caught what has been called the “four-legged fossil fish” was caught in the Indian Ocean off the coast of Madagascar. You can read the whole story here: https://www.newsweek.com/extinct-fossil-fish-dating-back-420-million-years-found-alive-madagascar-1591688 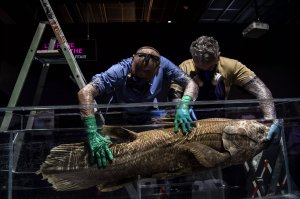