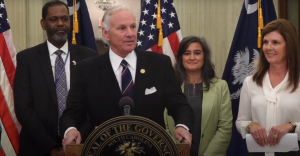 COLUMBIA, SC (WOLO)– On Thursday, Governor Henry McMaster was joined by Lieutenant Governor Pamela Evette and members of the General Assembly for a ceremonial bill signing. The governor signed the Student Identification Card Suicide Prevention Act, which requires public schools in South Carolina to put the Suicide Prevention Lifeline phone number on student ID cards for students in grades 7-12. Additionally, officials say the law applies to the both the state’s public and private higher learning institutions.

“This law not only provides our students with easy access to a vital resource, it will also serve as a daily reminder that they are not alone,” said Governor Henry McMaster. “Through the work of the South Carolina Department of Mental Health and many others, South Carolina has developed statewide infrastructure to support those in need. We must continue to fight to end the stigma surrounding mental health issues and work to ensure all South Carolinians know how to reach out for help.”

Each school is supposed to also add social media platforms, text line numbers and other resources on these cards. Officials say schools are required to provide at least one additional resource.

“The pressures of society are even stronger now than they have ever been,” said Lt. Governor Pamela S. Evette. “This number will give our parents peace of mind in knowing that our children have the resources they need to reach out to to get good, safe advice.”

“On the surface, this bill just looks like a number on the back of an ID card, but in reality, it is a lifeline,” said Director of S.C. Department of Mental Health Dr. Ken Rogers. “It is something that young people will be able to look at and know there is a number to call to get help.”

The Suicide Prevention Lifeline is available 24 hours a day, seven days a week to offer free help for those in a suicidal or emotional crisis. It can be reached at 1-800-273-8255.

“This act will save lives,” said South Carolina State Senator Katrina Shealy. “It will put valuable resources directly into the hands of our young people who oftentimes don’t know where to turn in times of personal crisis.”

Suicide is the second leading cause of death in teens in the U.S.

War on the pandemic changes gears