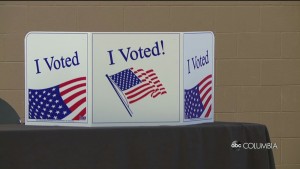 Richland Co.(WOLO)–The director of the Richland County Elections and Voter Registration says issues have been reported at 11 different precincts Tuesday morning however they are not preventing residents from casting their ballots.

Voters in Richland Co. are casting their ballots in runoffs in the City of Columbia’s mayoral race as well as the at-large seat on Columbia’s city council.

According to Director Alexandria Stephens ballot marking devices were not reading ballots however voters can be given a blank ballot to cast their vote.

Stephens says the machines were given to the county by the state last year and her department has been in contact with the State Election Commission to correct the issue.

She adds that if anyone was turned away from their precinct because of the issue should return to their polling place and cast their ballot.

The problems were first reported to ABC Columbia News by a spokesperson for Daniel Rickenmann’s mayoral campaign.

In a news conference Rickenmann urged voters to remain patient and make sure to vote.

He also noted that the problems were happening in precincts he performed well in during the general election.

ABC Columbia also spoke with Tameika Isaac-Devine who added that she is encouraging everyone to stay in line and make sure to vote.