‘We feel for the family. This was not something we created’: Sheriff address officer-involved shooting 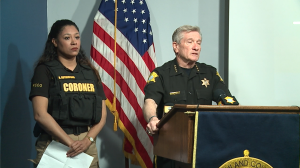 According to investigators, deputies responded to Heyward Brockington Road just before 6:00 p.m. Saturday, March 19 for a domestic call with a weapon.

Deputies immediately rendered CPR on Moorer Charley for 20 minutes until EMS arrived on scene. He was later pronounced deceased.
Today a press conference was held to address the shooting. Richland County Sheriff Leon Lott identified the deputies involved in the shooting as Zachary Hentz and John Anderson.
“This is a sad tragedy for all of those involved. Mental health is a serious issue in our community that has to be addressed. As much as we train our deputies and our crisis intervention teams, unfortunately those in mental crisis sometimes resort to violence,” Sheriff Lott said. “We as a sheriff’s department and as a community will continue to address those with mental illness and give them the proper treatment they need.””
Categories: Local News, News
Tags: Deputy Zachary Hentz, heyward brockington road, Irvin Moorer Charley, John Anderson, Officer Involved Shooting, Sheriff Leon Lott
Share