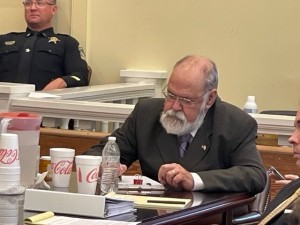 HORRY COUNTY, S.C. (WPDE) — An Ex-Horry County deputy has been found guilty on all charges in the drowning of two women.

The state and defense rested their case Thursday morning in the trial of former Horry County Sheriff’s Deputy Stephen Flood.

The jury announced that Flood is guilty on all charges.

Twelfth Circuit Solicitor Ed Clements said Flood and his then co-worker Joshua Bishop drove into floodwaters in Marion County on Sept. 18, 2018, after Hurricane Florence with two women in their transport van.

Clements initially said that he would try both men together. No word as to why they’re being tried separately.

Wendy Newton, 45, of Shallotte, N.C. and Nicolette Green, 43, of Myrtle Beach, died inside of that detention center transport van when it was overtaken by floodwaters.

Bishop has been charged with two counts of involuntary manslaughter.

Flood and Bishop were fired from the Horry County Sheriff’s Office. Termination papers state they were fired for “wanton disregard for the safety of persons.

The state called more than 20 witnesses before resting its case Wednesday afternoon.

Flood’s name was listed on a defense witness list, but he won’t testify.

Clements is presenting closing arguments to the jury as of 9:50 Thursday morning.

He told jurors that they’ve heard all the witnesses and seen all the evidence to be able to make the right decision.

Some of the state’s witnesses including first responders, state police, a forensic pathologist and Horry County Sheriff’s deputies.

MUSC Forensic Pathologist Dr. Thomas Beaver testified Wednesday as to why he didn’t rule the women’s deaths as a homicide, instead of an accident.

Beaver told jurors he didn’t have much information about the case when he reached his decision as to a cause and manner of death.

He added he was only told the two women drowned in the back of a van.

Alan Starnes also took the stand Wednesday on behalf of the state.

Starnes said he worked with a 12 man rescue team that tried to free the women from the van, but couldn’t.

Flood has appeared to be very engaged during the four day trial, paying close attention and taking notes when witnesses are on the stand.

Article V, 21 of the S.C. Constitution provides: “Judges shall not charge juries in respect to matters of fact, but shall declare the law.” The basis of this constitutional provision is founded upon the concept of our system of justice that every person charged with a crime has the right to a fair and impartial trial and that such a trial may only be achieved with the neutrality of the trial judge.”