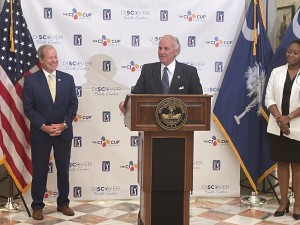 COLUMBIA, SC (WOLO)– A big PGA Tour event is swinging its way to the Palmetto State this fall! Governor Henry McMaster announced new details on the CJ Cup at the State House Wednesday.

This will be the tournament’s first southeast appearance, after launching in Korea in 2017 and spending the last two years in Las Vegas.

“We are excited to once again host the PGA TOUR at the Congaree Golf Club,” said SC Secretary of Commerce, Harry M. Lightsey III. “THE CJ CUP represents a unique opportunity to showcase South Carolina to a global audience, reinforcing our state’s livability which is a pivotal piece of the economic development puzzle.”

The CJ Cup in South Carolina will be the second PGA Tour event ever hosted at the Congaree Golf Club, following the 2021 Palmetto Championship.

“Last year, South Carolina made the strategic decision to host the historic Palmetto Championship at Congaree, and the regional economy and statewide golf industry benefited tremendously,” Gov. Henry McMaster said. “This year, we have another unique opportunity to show viewers around the world what makes South Carolina special, and we look forward to doing that alongside the CJ Group, the PGA TOUR, and Congaree in October.”

The @PGATOUR is returning to South Carolina and the Congaree Golf Club this October. After hosting three highly successful tournaments in 2021, South Carolina has captured the eye of the golf world, expanding our reputation as a top destination for professional golf. pic.twitter.com/KsP94zjLyJ

The tournament runs from October 17-23 at the Congaree Golf Club in Ridgeland.

You can find more information on the event at www.pgatour.com.