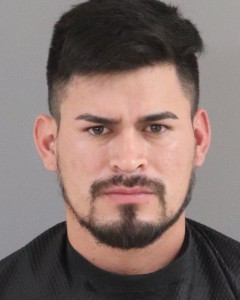 Sumter Co. , SC (WOLO) — The Sumter County Sheriff’s Office says a man is behind bars facing multiple charges after taking authorities on a wild ride. According to deputies, Norlan Betancourt -Vasquez was arrested yesterday after officials say he was speeding down Highway 378 toward Sumter in excess of 25 miles per hour. Deputies say Betancourt-Vasquez of Lawrenceville, GA was stopped by officials who later determined he did not have a valid drivers license and were instead say he gave authorities a fraudulent license from another country that proved to be invalid.

Deputies say as they approached his car, they could see a bag containing Methamphetamine or cocaine base, heroin,  drug paraphernalia, weapons, and ammunition in plain sight. After deputies put Betancourt-Vasquez  in handcuffs, authorities say he escaped their custody running into a swampy wooded area. With the help of other agencies,  Authorities were able to locate him hiding in the woods a short time later and take him into custody.