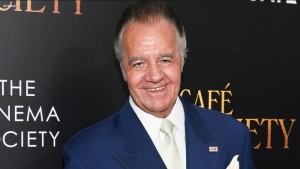 (ABC News) — Tony Sirico, famous for portraying “Paulie” Walnuts on the hit HBO series “The Sopranos,” passed away Friday at the age of 79.

The news was shared by his Sopranos co-star Michael Imperioli on his Instagram page.

“Tony was like no one else: he was as tough, as loyal and as big hearted as anyone I’ve ever known. I was at his side through so much: through good times and bad. But mostly good. And we had a lot of laughs,” Imperioli wrote in his post.

Fr. Robert Sirico, Tony’s brother, confirming his death in a Facebook post. Tony Sirico left behind two children, Joanne Sirico Bello and Richard Sirico, “grandchildren, siblings, nieces, nephews and many other relatives,” according to his brother.

“​The family is deeply grateful for the many expressions of love, prayer and condolences and requests that the public respect its privacy in this time of bereavement,” Robert Sirico wrote.

A funeral is scheduled for Wednesday in Brooklyn.

Sirico played the wisecracking confidant of Tony Soprano during the show’s entire run from 1999 to 2007. The character became a fan favorite for his wisecracks and trademark hairdo.

Born and raised in Brooklyn, Sirico was no stranger to the world of organized crime, according to an interview with Cigar Aficionado in 2001.

“I grew up in Bensonhurst, where there were a lot of Mob-type people. I watched them all the time, watched the way they walked, the cars they drove, the way they approached each other. There was an air about them that was very intriguing, especially to a kid,” he told the magazine.

Sirico served time in prison for various misdemeanors and felonies and decided to change his path after getting a visit from an acting troupe while behind bars.

“I saw them, and right there and then I knew what I wanted to do. It just hit me. I said, ‘I can do that,” he told Cigar Aficionado.

Sirico started in bit parts in many famous mob films over two decades including “Casino” and “Goodfellas.”

Following the end of “The Sopranos,” Sirico continued to act and guest star on other shows, including a mini-arc on the animated sitcom “Family Guy” where he portrayed talking dog, Vinny.