USGS: Another earthquake hits near Elgin early this morning 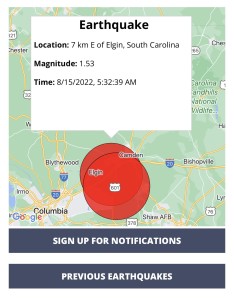 ELGIN, S.C. (WOLO) – The Midlands has been rocked by yet another earthquake this morning.

According to the South Carolina Emergency Management Division, more than 70 earthquakes have hit in the Lugoff-Elgin area since December 2021.

Some geologists believe an initial earthquake in December may be allowing water from the Wateree river to move into the new cracks that opened then, setting off more earthquakes.

SCEMD says geologists studying the earthquakes believe this may be the longest period of successive earthquake activity in the history of South Carolina.