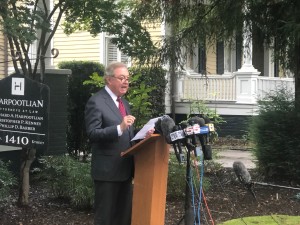 The motion is asking a court to order the state to comply with their obligations under court rules and case law and furnish discovery materials in the case.

Murdaugh was indicted for the murders of his wife and son in July.

They were found murdered at a home on the family’s Colleton Co. hunting property in June of ’21.

Murdaugh has pleaded not guilty and his case is set to be tried in January. Harpootlian says with each day that passes without the evidence it becomes more difficult to get prepared for trial.

“You got your prosecution. It’s trial by ambush. Give us the stuff. You went to a grand jury and said you’ve got enough evidence to convict Alex Murdaugh and convince the jury without a reasonable doubt. Where is it? I don’t have a shred of paper, I don’t have an email, I don’t have an exhibit, I don’t have any evidence. We want to try this case in January,” says Harppotlian.

The SC Attorney Generals office has filed a response to the motion which reads in part, “Defendant Murdaugh’s motion is unfortunately a not unexpected but completely blatant attempt to create drama where formerly there was none.”

The state adds that it has already provided thousands of pages of evidence to the defense.

Murdaugh’s trial is scheduled to begin in January.