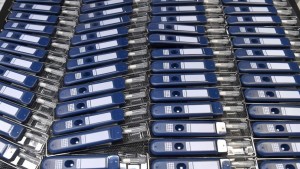 (ABC News) — With COVID-19 funding drying up and no fresh cash infusion from Congress, the Biden administration says it will suspend its offer of free at-home rapid tests through COVID.gov. The program will be put on pause later this week.

“Ordering through this program will be suspended on Friday, September 2, because Congress hasn’t provided additional funding to replenish the nation’s stockpile of tests,” a banner alert on the federal website said. The U.S. Postal Service’s free test page also noted the impending halt to the program.

A senior administration official told ABC that the move to pause the program is “to preserve our limited remaining supply” — particularly, to have a reserve in case a potential new wave of the virus sweeps the country in the coming months — “so that we can ensure we have a limited supply of tests available in the fall, when we might face a new rise in infections and more acute need.”

“The administration has been clear about our urgent COVID-19 response funding needs. We have warned that congressional inaction would force unacceptable trade-offs and harm our overall COVID-19 preparedness and response — and that the consequences would likely worsen over time,” the senior administration official said.

“The administration has been clear about our urgent COVID-19 response funding needs. We have warned that congressional inaction would force unacceptable trade-offs and harm our overall COVID-19 preparedness and response — and that the consequences would likely worsen over time,” the senior administration official said.

“We were also clear that failing to provide resources to be prepared would mean that if a surge were to come later, the cost to the American taxpayer would be even higher. Unfortunately, because of the limited funding we have to work with, we have had to make impossible choices about which tools and programs to invest in — and which ones we must downsize, pause or end altogether,” the official said.

Of the 1 billion free tests President Joe Biden pledged to secure at the beginning of this year, so far more than 600 million tests have been distributed through COVID.gov/tests, the senior administration official said, offering “every household” the “opportunity” to get a total of 16 tests in the three rounds of orders that the government opened up to the public.

The senior official added that the administration “will continue to work within its limited existing resources to secure as many additional tests as we can.”

“Congress hasn’t provided the COVID funding we need to replenish the nation’s stockpiles of tests, as simple as that,” White House press secretary Karine Jean-Pierre said Monday. “This is an action we’ve been forced to take that will help preserve our limited remaining supply.”

Orders through the program will cease on Friday.

Meanwhile, tests will still be distributed at 15,000 federally supported, community-based sites such as local pharmacies and libraries. Americans with eligible insurance can also still be reimbursed for at-home tests through their private health insurance, Medicare and Medicaid, the administration official said.

“If Congress provides funding, we will expeditiously resume distribution of free tests through [COVID.gov/tests],” the official said. “Until then, we believe reserving the remaining tests for distribution later this year is the best course.”

Over the course of the spring, lawmakers failed to secure an additional $10 billion in funding for the program.

Then-press secretary Jen Psaki said in April, “The program that reimbursed doctors, pharmacists and other providers for vaccinating the uninsured had to end today due to a lack of funds. America’s supply of monoclonal antibodies that are effective at keeping people out of the hospital will run out as soon as late May. Our test manufacturing capacity will begin ramping down at the end of June,” adding that the failed Senate vote to secure additional funding at the time was “a step backward for our ability to respond to this virus.”

Democrats have vowed to continue the fight for additional funding this fall. The chairman of the Senate Appropriations Committee, Pat Leahy of Vermont, introduced a $21 billion emergency funding bill in late July and has vowed — along with panel co-authors Patty Murray, D-Wash., and Chris Coons, D-Del. — to get it passed this year.