COLUMBIA, SC (WOLO) — The South Carolina Department of Veterans’ Affairs held its annual Governor’s Summit today. The meeting is a special presentation to Governor Henry McMaster on the state of veterans affairs in South Carolina.

The meeting was held at the Pastides Alumni Center on Senate Street downtown.

Topics discussed at the meeting are known as “The Big Seven” and cover the following issues: transportation, workforce development, housing, engagement, court services for veterans who are detained, and school resources for children of military members. 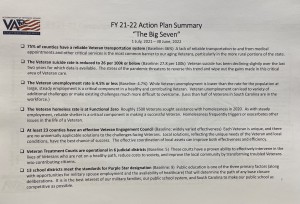 The CEO of United Housing Connection Lorain Crowl says homeless veterans should not be viewed as having a condition, but rather living an experience.

“And we say we’re going to effectively end those conditions. They’re human experiences. So rather than talking about the overwhelming task of ending those experiences, we talk about creating a system where we make those experiences brief, rare, and non-recurring,” Crowl says.

According to health officials present at the summit, the suicide rate for veterans is almost twice the rate of non-military suicides in South Carolina. Firearms account for 75% of veteran suicides.

The Department of Veterans’ Affairs hopes to lower that number with programs like Palmetto Pathfinder — a free service that links a veteran to another volunteer veteran to provide them with help, encouragement, and resources with any issues they face.

The Workforce Development Coordinator with the S.C. Dept. of Veterans’ Affairs, Al Taylor, ensures hiring fairs are held to help veterans find civilian jobs. “We want to advocate for veterans with hiring managers by assisting in translating military skills and certifications for civilian occupations across the board,” Taylor says.

Taylor also says the veteran unemployment rate in S.C. is at 3.5%.

Purple Star School Districts have volunteers who are committed to the educational and emotional needs of military members’ children.

The Secretary for the S.C. Veterans’ Affairs Will Grimsley, says one of his goals for this year is to make sure veterans have equal access to the resources provided.

“And we really need to work hard on helping additional resources in our underserved counties, working hard in our rural population.And that’s the place we’re going to put additional emphasis. That involves better access to transportation networks, to benefits and claims, to county offices being opened more, and really so that we are delivering services equitably across the state,” Secretary Grimsley says.

For more information on any of the services provided by the S.C. Department of Veterans’ Affairs visit the department’s website here.

The South Carolina Veteran Coalition‘s mission is to improve the care, connection, and family resources for veterans.