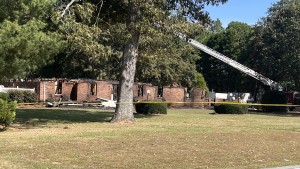 SUMTER,  S.C. (WOLO) – One man is dead and an officer injured after an officer-involved shooting in Sumter, according to the Sumter County Sheriff.

Investigators say deputies were dispatched to a domestic disturbance along Cains Mill Road around 8 a.m.

When the first deputy arrived on the scene, he saw that the garage area was on fire and was attempting to put the fire out when Leroy Quick, Jr. opened fire on him. The deputy returned fire, according to investigators.  When other deputies arrived on scene, they discovered the Quick subject in the back yard unresponsive.  He was pronounced dead at a hospital in Columbia from a gun shot wound later this morning.

The deputy is being treated for a gunshot wound and is in serious condition.

“It appears that our deputies acted appropriately and I commend them on their quick actions in defense of themselves and others,” says Sumpter Sheriff Anthony Dennis.

The State Law  Enforcement Division has been called in to investigate not only the officer involved shooting, but also the arson.

This is a developing story. Stay with ABC COLUMBIA for updates.