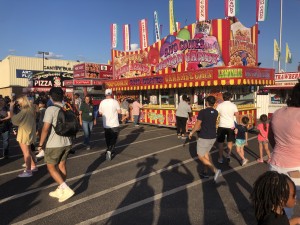 COLUMBIA, S.C., (WOLO) — Another year for one of the largest state fairs in the Southeast has come and gone. The 12 day annual attraction that keeps families coming back year after year continues to reinvent itself, and thrive bringing fans back to the major attraction.

After shutting down and deciding not to operate the event when the pandemic struck, the non profit made a come back after introducing the Fair Food Drive. A move that gave members of the community a chance to get a taste of the favorite foods they used to have to wait another year for. The fact the annual event keeps people coming back is not going unnoticed.

Friday, Richland County Sheriff Leon Lott released his reaction to the fair this go round, calling it “a successful, safe year”.  Each year the Richland County Sheriff’s Department works to secure the area in and around the event. They tell ABC Columbia News they work in tandem with the fair staff to use technology and procedures, like security cameras, metal detectors, the use of clear bags, and a curfew for those under 18 in order to keep fair goers as safe as possible throughout the duration of the event.

“We work hard every year to ensure that Fair is a place where families can come and feel safe,” Sheriff Lott said. “Anytime you have crowds of that size in one area, there is the potential for something to happen but we put measures in place to limit those possibilities. The fairgrounds staff worked with us, as always, to implement small changes that had a big impact.”

According to the department, out of the more than 355 thousand people who came out to enjoy the sights and sounds of the state fair this year, there were only four arrests made in connection to minor incidents for the entire 2 week stretch.
Nancy Smith, General Manager for the South Carolina State Fair says,

“‘To the Far and Beyond’, the fair’s theme this year, helped to showcase the traditions of the fair, the memories made and the impact the SC State Fair has on our state. None of this would be possible without the invaluable and beneficial relationship and collaboration we have developed with our Richland County Sheriff’s Department. Sheriff Lott is a fierce supporter of our fair as well as our number one fan. Working together we were able to bring the most important aspect of our fair to our patrons, a very safe one. We are more than thankful for this support and look forward to working with Sheriff Lott and his department in the future.”