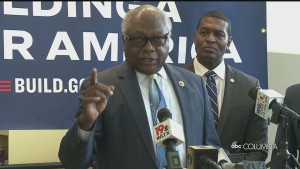 Columbia, SC (AP)— Congressman Jim Clyburn is being called the winner of the 2022 Mid term election according to the Associated Press. The win gives the Majority Whip his 16th full term in the U.S. House of Representatives allowing him to continue representing the 6th district. According to the South Carolina Election Commission, Clyburn has 62.68% of the vote, beating his republican challenger Duke Buckner with 37.69% of the vote, that’s with more than 165,000 votes counted.