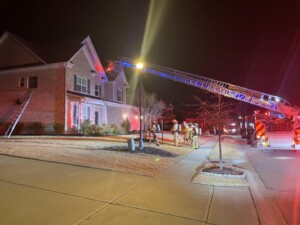 According to investigators, firefighters responded to the fire on the 400 block of Litchfield Lane before 8 p.m. and found a small fire in the kitchen.

Police shut down portions of the road in the Barr Neighborhood Thursday night while firefighters continued to fight the fire.

Authorities say the fire was later extinguished and no injuries were reported.