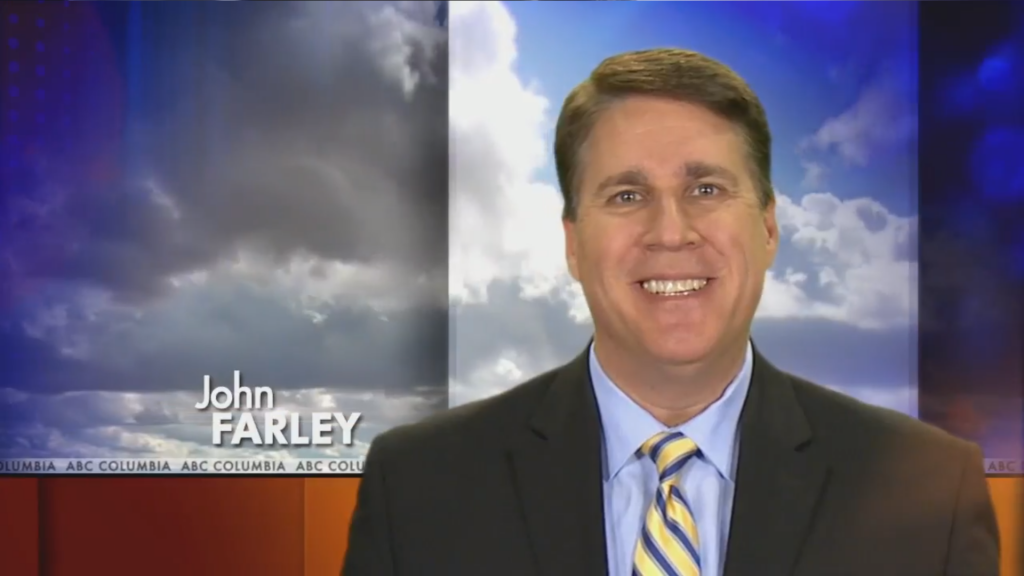 John Farley has worked as a Meteorologist for more than 20 years and is honored to be the Chief Meteorologist for ABC Columbia. He understands the challenges of forecasting the ever-changing weather of the Midlands. That was never more important than on Saturday night October 3rd, when the worst storm of a generation dropped up to 21 inches of rain right here in Columbia. During that storm, John spent the night and following day in continuous coverage, warning viewers of the perils of the flooding. He says, “It’s a period of 36 hours that has left an indelible imprint on me. Seeing our neighbors, whose lives are now changed forever because of the power of this storm, is very impacting.”

While in Graduate School, John worked with a team to create mathematical models that forecast the fog at San Francisco International Airport. His team was given the Excellence in Aviation Award from the FAA in 2002. John Farley is happy to report that the FAA still uses those models today. While in California, John also worked as a consultant for a power company which provides gas & electricity to roughly 16 million people. His responsibilities included temperature, wind, snow, and severe weather forecasting, as well as providing long-term electricity generation forecasts for proposed wind farms.

John loves to talk weather and he has visited with thousands of students over the past 20 years. He lives in Lexington with his wife and three children. They are all thrilled to call the Midlands home.

Alberto is the first Tropical Storm of 2018. It's projected to move north over the next several days, with the center of the storm making landfall sometime on Monday along the Gulf Coast. On this track, the Midlands will see…

Look for more scattered showers this weekend, but the rain will be steady and heavier starting on Monday.

As you might expect, all the recent rain has made a significant impact in our drought. These images show the change over the past month. As of today, the majority of South Carolina is no longer in any drought conditions.…

It'll be quiet in the morning with scattered late storms through Saturday. Look for more substantial rain arriving late Sunday and continuing next week.