CAYCE, SC (WOLO)– The Lexington County Coroner has released the identities of two people killed in a motorcycle crash Friday in Cayce.

According to Coroner Margaret Fisher, the collision occurred in the 2800 block of Charleston Highway at approximately 7:00P.M. on June 28, 2019.
According to Coroner Fisher, Mr. Melvin Clyde Horton, Jr., 54, of Cayce, and Ms. Heidi Joy Goots, 55, of Columbia, were pronounced dead at the scene due to their injuries.
The coroner says Mr. Horton and Ms. Goots were traveling on a motorcycle when they were struck by a vehicle turning left onto Charleston Highway.
According to the coroner, they were not wearing helmets when the collision occurred.

The driver of the vehicle was transported to an area hospital with non-life-threatening injuries, says Fisher. 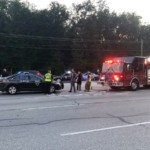