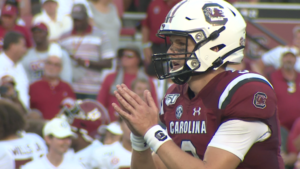 Gamecock freshman quarterback Ryan Hilinski was named the SEC Freshman of the Week for his efforts against No. 2 Alabama in week three./(Cam Gaskins, WOLO)

COLUMBIA, S.C. — On Monday the Southeastern Conference announced that South Carolina quarterback Ryan Hilinski was named the conference’s freshman player of the week for his performance in week three against No. 2 Alabama.

In just his second career start — and first against an FBS opponent — Hilinski finished with 324 passing yards and two touchdowns as the Gamecocks fell to the Crimson Tide 47-23.

He’ll look to build upon this performance in his second career SEC start, when the Gamecocks travel to Missouri on Saturday to take on the Tigers. Kickoff is set for 4:00 p.m..