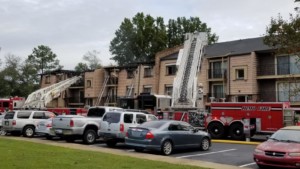 Columbia, SC.. (WOLO)– The Columbia Fire Department responded to a 2-Alarm apartment fire at Briargate Condominiums Monday morning. It happened at about 7 a.m. at the complex on Menlo Drive.

“When they pulled out of the station, it was already heavy fire and smoke coming through the roof of the apartment building,” said Columbia Fire Chief Aubrey Jenkins.

Authorities say out of the 12 units in the building, 11 were occupied and one was vacant. Eight families were affected.

“It’s one of those things where you hate to see when you got a big fire like this impact so many families at once. And we just want them to know that the Red Cross is here and that we’re going to help them, especially in their immediate needs,” said Ben Williamson with the American Red Cross.

Jenkins said this is not the first fire they’ve responded to at the complex.

“It seems like this is a constant thing out here, we continue to combat fires. So we just really gotta dwell down and see what we can do to prevent these fires. Get with the management, make sure that all these apartments are all checked out thoroughly. Make sure that there’s nobody out there just doing these random acts,” said Jenkins.

Jenkins added that one person did suffer a minor injury while evacuating the building, but did not need to be transported to the hospital.

“They got injured when they stepped outside of the structure when some debris fell and burned them on their lower foot,” said Jenkins.

Officials said they were able to contain the fire in part thanks to a firewall in the building.

“One thing about this building, it does have a firewall. So had it not been for that fire wall, we’d probably have this roof burnt completely off. So it did contain it, at least to one side,” said Jenkins.

The Red Cross is helping those people who have been displaced.

“We’re helping them with financial assistance for immediate needs; so clothing, food, some lodging. We’re also providing them some comfort kits, so it’s got some basic items, some basic hygiene items in there as well,” said Williamson.

About 40 firefighters from both Columbia Fire and Irmo Fire responded to the scene. Crews had to be cautious extinguishing this fire because of the roof.

“Because we had so much fire burning in the roof and above them, and it was pretty heavy and significant, we wanted to make sure that we get everybody out so we can kind of regroup, pour water from the top. Because we don’t want this fire caving in on our firefighters when they’re trying to put the fire out,” said Jenkins.

The Richland County Fire Marshal is investigating the cause of the fire.