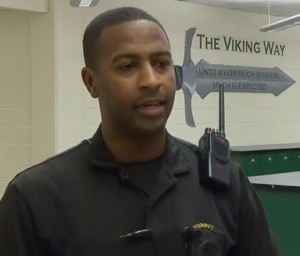 According to Richland investigators, 40 year old Jamel Bradley who worked for the Department and as a School Resource Officer, is now charged with Sexual Battery with a student authorities say he repeatedly had sex with between October of 2015 and May of 2016 while the minor attended Spring Valley High School.

Officials say they discovered this newest allegation when they were informed that a confidentiality agreement was lifted, allowing authorities to use information received during a deposition to file charges against Bradley in a federal lawsuit that is currently pending.

Bradley turned himself into investigators today and was booked into the Alvin S. Glenn Detention Center.

“I am mad as hell that this monster hid behind the badge and my name for all this time,” Sheriff Lott said. “This is beyond unacceptable behavior by anyone.”

Bradley was terminated from the Richland County Sheriff’s Department on Oct. 30, 2019. He was hired in December 2007.

Sheriff Lott asks if anyone knows of any law enforcement officers that involved in illegal activities to take it seriously and report it to law enforcement. Sheriff Lott adds that if you or anyone who know, has been a victim to call the Richland County Sheriff’s Department at  803-576-3000.