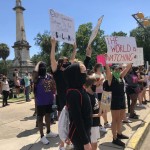 COLUMBIA, SC (WOLO)– A third day of protests in memory of George Floyd got underway Monday afternoon at the South Carolina State House.

Many holding posters and signs saying “I can’t breathe”.

Some protestors can be seen sitting on the lawn of the State House grounds, others standing holding up signs.

Once again, there is a police presence but many officers are standing back from the protestors.

At one point, protesters were lying down “Today’s protest is totally different. It’s a “die in protest”, still with chants of “I can’t breathe” and “we can’t breathe.

After the groups stood up they moved to the sidewalk on Gervais Street, standing side by side holding signs chanting “We can’t breathe” as cars drove by honking.

Watch as protesters peacefully line sidewalk at State House on Gervais Street in Columbia. Drivers are honking as they go by. @abc_columbia pic.twitter.com/VF89hX3JkL

Lugoff-Elgin area residents react to string of earthquakes recorded in the area.