COLUMBIA, SC (WOLO)–We are now in day four of protests in Columbia, following the death of George Floyd.

Watch Here: a Live update from the 5pm hour.

Protesters say down to hold a moment of silence. 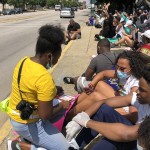 Also on hand were people helping others to Register to Vote.

At one point in the afternoon the group was kneeling and playing music.

Day 4 of the #ColumbiaProtest. Powerful moment right now, as people kneel with their fist up and music plays. @abc_columbia pic.twitter.com/IDM9jEqPRF

The protests Tuesday have been peaceful.