The mural is located at 2018 State Street in Cayce

Cayce, SC (WOLO) — A new mural painted along the side of a building in the City of Cayce is turning some heads.

Local artist Ija Charles is the young lady behind the art work she is calling ‘Cayce Wonders’. Ija says she initially created the artwork for last year’s South Carolina State Fair. You can even see the infamous ferris wheel in the curls on the head of hair in the image. 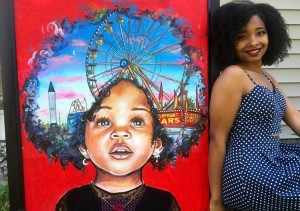 Ija says when the City of Cayce Mayor, Elise Partin saw the image she ‘fell in love with the little girls face’ and was given the go ahead to replicate the image on a building in the city.

It appears others are falling in love with it as well. Ija saying she has gotten a lot of postive feedback over the new artwork.

You can check it out at 2018 State Street in the City of Cayce.

Tis the Season: Red Kettles out across the Midlands