3 Alarm fire started around 6:30am Saturday 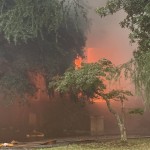 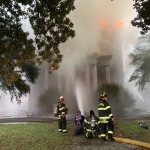 According to fire officials, the fire, off Bull Street, reached 3 alarm status. At one point there were at least 50 firefighters on scene.

According to officials, the first crews responded sometime after 6:30 a.m. Saturday morning.

Firefighters say there was heavy fire throughout the building Saturday morning.

Fire officials say crews are attacking the fire from the outside of the building.

This is a developing story, stay with ABC Columbia news for updates.