River patrol asks residents not to go near, try to touch or capture these dangerous snakes 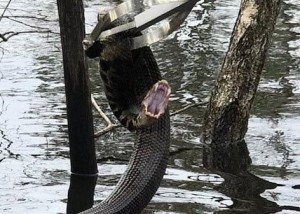 Horry Co., SC (WOLO) –The Horry County Police Department River Patrol is reminding residents in areas where floodwater continues to stand that there could be dangers slithering around. One Police say has been spotted are dangerous snakes throughout the county.

The Department posted this photo on Twitter of a Cottonmouth snake they say tried to get on their River Patrol boat before they caught it.

According to HCPD, “as floodwaters encroach on their usual hiding spots, it’s not uncommon for wildlife of all kinds to seek higher ground. This means that areas you think you know well could hold entirely new hazards.”

While #HCPD River Patrol was out patrolling flooded areas, this snake tried to make our boat its home!

The Horry County Police Department asks residents to stay out of floodwaters, and if they do cross paths with wildlife, to leave them alone. According to the website  Wikipedia.org the Cottonmouth snake, “is the only Wikipedia.org:venomous species of North America’s water snakes and one of 21 venomous snakes in the United States,” and when threatened is able to inflict a painful and deadly bite.