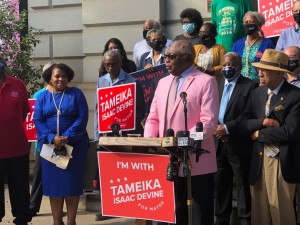 COLUMBIA, SC (WOLO)– A well known name in South Carolina politics voiced his support for a candidate to be the next mayor of the City of Columbia. Monday, morning U.S. Representative Jim Clyburn announced his endorsement of City Councilwoman Tameika Isaac Devine.

I am so honored to have the support of @ClyburnSC06.

Together we will continue to work to meet the needs of the people we serve. https://t.co/bMH3ipQejS

Congressman Clyburn says he believes Devine is the right person to lead the city into the future.

Devine will face former Benjamin advisor Sam Johnson, as well as current and former Council Members Daniel Rickenmann and Mo Baddourah in the election on November 2.