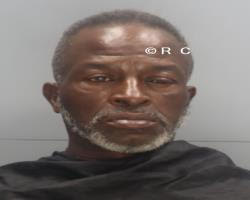 (Source: RCSD)
COLUMBIA, S.C. (WOLO) – The driver responsible for the death of a pedestrian on Fairfield Road is now in jail.
According to the Richland County Sheriff’s Department deputies responded to Fairfield Road and Eisenhower Drive around 3 p.m. on Saturday, May 7th.  Police received reports of shots fired and arrived on scene to find that several people were hit by a vehicle. Investigators say the driver left the roadway, striking pedestrians who were gathered for an event, one female was deceased at the scene and two others were treated at a local hospital for the injuries they sustained after being struck.
Deputies also say once the driver hit the victims, he continued driving down a neighboring street and was pursued by others from the gathering. Shots were reportedly fired at that time, though no one was hit and the driver of the vehicle was detained by deputies at the scene, according to police.
The driver, Carl Giles has been arrested and charged with Reckless Vehicular Homicide, Hit and Run Resulting in Death, Hit and Run Resulting in Great Bodily Injury, and Hit and Run Resulting in Minor Personal Injury. He was booked at the Alvin S. Glenn Detention Center and denied bond.
Police say based on the investigation, there is reason to believe that another person may have been in the vehicle with Giles at the time of the incident.
Anyone with information about this incident is asked to submit a tip to Crime Stoppers at crimesc.com.
Categories: Local News, News
Tags: deadly, Hit and Run, Shooting
Share