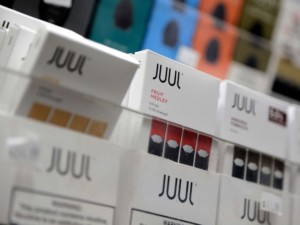 (ABC News) — The U.S. Food and Drug Administration announced Thursday it is taking Juul Labs e-cigarettes and other products off the market.

It comes after the federal health agency completed a nearly two-year review of the manufacturer’s application to sell its vaping device and tobacco- and menthol-flavored pods.

“Today’s action is further progress on the FDA’s commitment to ensuring that all e-cigarette and electronic nicotine delivery system products currently being marketed to consumers meet our public health standards,” FDA Commissioner Robert M. Califf said in a statement. “The agency has dedicated significant resources to review products from the companies that account for most of the U.S. market. We recognize these make up a significant part of the available products and many have played a disproportionate role in the rise in youth vaping.”

Juul Labs said it would seek a stay of the decision and was “exploring all of our options under the FDA’s regulations and the law, including appealing the decision and engaging with our regulator.”

The company has long claimed it’s product is important as a tool to stop smoking cigarettes.

“We remain committed to doing all in our power to continue serving the millions of American adult smokers who have successfully used our products to transition away from combustible cigarettes, which remain available on market shelves nationwide,” Juul Labs said.

After hitting the market in the mid-2010s, Juul became the most popular brand of e-cigarettes available, in large part due to its wide variety of flavors, including creme, mango and mint.

Politicians and anti-tobacco advocates have accused the company of using these flavors — along with a sleek design resembling a USB flash drive — to market vaping to U.S. children and teenagers.

More than 2 million American middle and high school students used e-cigarettes in 2021 — with 8 in 10 students saying they use flavored e-cigarettes, according to the FDA.

The 2020 National Youth Tobacco Survey found Juul was the most popular e-cigarette brand used by adolescents with 25.4% of high school e-cigarette users and 35.1% of middle school users saying Juul was their most used brand.

Nicotine exposure from e-cigarettes can hinder brain development in adolescents and young adults, which can continue into the mid-20s, according to the Centers for Disease Control and Prevention.

Just one Juul pod contains as much nicotine as a pack of 20 traditional cigarettes, the manufacturer has said.

The CDC also says e-cigarettes can contain heavy metals and cancer-causing chemicals that can damage the lungs.

The American Heart Association applauded the decision, saying in a statement,

“We call on Juul to immediately comply with the FDA order so these products no longer threaten public health, and we urge the FDA to take swift and severe enforcement action if the company defies the order.”

Juul did not respond to ABC News’ request for comment.

Parent company Pax launched the Juul e-cigarette in 2015. After success with initial sales, Juul spun out from Pax as a separate company in 2017.

In 2018, when Altria acquired its stake in Juul, the e-cigarette company represented 75% of the tobacco vaping market, according to a Wells Fargo analysis of Nielsen data. By 2021, Juul’s share of the market had fallen below 50%, The New York Times reported.

Juul CEO Kevin Burns stepped down in 2019 as the company faced sharp scrutiny over the health effects and the addictive nature of its products. He was replaced by longtime tobacco executive K.C. Crosthwaite, who currently leads the firm.

In 2009, Congress gave the FDA authority to regulate the manufacturing, distribution and marketing of tobacco products.

E-cigarette manufacturers, including Juul, were required to submit their products to the FDA to review by September 2020 but were able to sell products while the FDA review was under way.