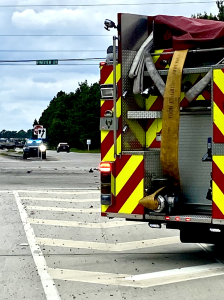 COLUMBIA, SC (WOLO)– The Richland County Coroner has identified 44 year old William Thomas Bowie, of Newberry, as the driver in a chase Monday.

According to officials, Bowie was killed on impact when he ran a red light at the intersection of Pineview Road and Shop Road and hit another vehicle. There were two vehicles involved in the crash.

The other driver was taken to the hospital with injuries, say officials.

According to Cayce Police, Bowie was wanted in the City of Cayce and in Richland County on charges of larceny, burglary, grand larceny and had other felony charges.

According to Police, Bowie’s vehicle was spotted in the 2000 block of Charleston Highway Monday around 3:45 pm. Police say instead of pulling over for officers, Bowie fled in the vehicle while officers were in pursuit for 15 miles.

It is very disturbing when suspects decide to not stop for police; especially ones who are career criminals. Bowie’s  background has varied from drugs to burglary to auto break-ins and grand larceny dating back twenty years.  It is inexcusable for someone to disregard the law and refuse to stop for blue lights and sirens.”