COLUMBIA SC (WOLO) – As schools across the State open for another year, we once again see forty foot buses all about town, ensuring our kids get from home to school safely.  Helping to ensure that safety and that the rules of the road, when it comes to sharing the road with buses, is Highway Patrol’s School Bus Safety Unit.

The Unit, led by Sergeant Matt Southern, travels across South Carolina, working with school districts, bus drivers, and even students, all with the goal of educating the public about laws and good practices.  “South Carolina’s bus laws are different than other states,” Sgt. Southern points out, “especially when it comes to stopping.”

Sgt. Southern says that there are a couple general scenarios when it comes to buses stopping to pickup or drop off children.  The first is the traditional two lane road, with only one lane running in each direction, generally with a double yellow line.  In this event, when the yellow lights, followed by the red lights come on, vehicles in both directions must come to a stop.

The second is any road with “more than one lane in the same direction.”  This would include most urban areas, including roads like Sunset Boulevard, Two-Notch Road, Harbison, and Broad Street in Camden.  In this case, according to Sgt. Southern, vehicles behind the bus must come to a stop when the yellow lights begin to flash.  It is unlawful to overtake any bus while the yellow or red lights are on.  Vehicles on the opposing side are not required to stop.  This applies to roads that have a center lane, or a median.  The law simply defines it as a road with more than one lane in a single direction.

Sgt. Southern says that this law, which was changed in the last few years, is different in other states, including North Carolina, which states that all vehicles in any direction, regardless of the size of the road must come to a full stop.

The Trooper points out that the fine for passing a school bus in South Carolina illegally is $1067 and six points on your drivers license.  He also said that bus drivers make reports if they see a violation, and in more and more cases, buses are outfitted with cameras, and drivers can be issued a ticket well after the violation.

For more information about bus safety in general, including workbooks for students, guidelines for drives, and other resources can be found here: https://www.scdps.sc.gov/tz/backtoschoolsafety 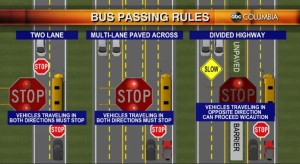